Clear the Air With Calm 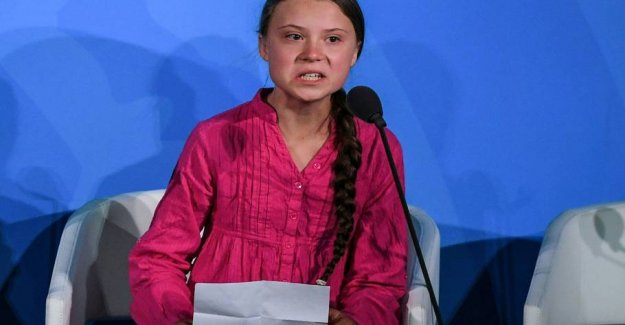 Don’t worry, kids; the world is in better shape than you may think. A speech’s quality is in the eyes and ears of the beholder. Even the pithy power of Abraham Lincoln’s Gettysburg Address received mixed reviews, so that a century later some newspapers retracted their criticisms and recognised their misjudgments.

Greta Thunberg’s speech is unlikely to be such a moment. But when the 16-year-old Swedish girl addressed the climate summit in New York, wild-eyed with anger and face contorted in anxiety, some people saw and heard informed courage and passion, while others discerned manic catastrophism and hysterical attentionseeking .

The ABC (as, sadly, you would expect) was gushing. “Tonight, a call to action,” Juanita Phillips opened Sydney’s main television bulletin, referring to Thunberg’s speech, “an impassioned plea at the United Nations … she stared down the US President and delivered a scathing speech on climate change” .

The propensity for adults to applaud all of this and talk about “inspiration” on the flimsiest of grounds was almost as disturbing as seeing the trauma on Thunberg’s face as she portrayed her dystopian outlook.

“People are suffering. People are dying. Entire ecosystems are collapsing,” Thunberg shrieked. She accused world leaders of failure , ignorance and betrayal. “You have stolen my dreams and my childhood with your empty words.”

Yes, people are suffering and dying. They have done every day in history and will do so every day into the future. But the claim that climate change is making people suffer and die now is fallacious and deliberately apocalyptic.

Thunberg talked about “irreversible chain reactions” and declared “we will never forgive you” and that “change is coming whether you want it or not” . Reason and perspective were shelved in favour of vitriol and emotion.

Yet such is the superficiality of the digital age that when I googled her name it returned 127 million matches; and when I did the same for Abraham Lincoln the total fell short at 125 million — and Thunberg’s star is rising.

Child psychologist Clare Rowe was so disturbed by Thunberg’s histrionics that she switched off her radio lest her children be traumatised . She has re-watched the speech.

“I find it extremely uncomfortable as a child psychologist and as a mother,” Rowe said. “I kinda just want to go up on stage and give her a hug.” Parents needed to discuss the climate debate with their children, she said, and to shield them from the worst alarmism or they could be overwhelmed by anxiety.

Rowe said children in Australia were falling victim to eco-anxiety . She said Asperger’s syndrome and obsessive-compulsive disorder would make Thunberg “quite literal” and create difficulty for her in managing emotions.

“I think she absolutely believes in her heart of hearts that we’ve got 10 years left for this planet,” Rowe said, “and I am seeing that (fear) in my office for children under 10. We don’t want to make kids more anxious; they’ve got enough on their plate already.”

It is worrying that the global warming movement would rely on teenage hysteria to draw attention to its cause. Few issues outside world wars have galvanised such a global conversation, so the eyes and ears of the world’s population are open — they don’t need this theatre. We need data, science, policy options and rational debate.

The proponents for drastic action must not consider they have enough information or appropriate prescriptions to carry the argument , otherwise why would they resort to teenage catastrophism and emotive appeals?

On one hand they say we should respect the science; on the other, they welcome Thunberg to the stage. It tells us all we need to know about the dumbing down of public debate.

We should be telling Thunberg, her generation and other younger children about their good fortune because their victimhood and selfpity is grossly misplaced. Scott Morrison is right to call for rational climate education including the facts and what nations are doing, but there is a broader context.

When I was born, 57 years ago today as it happens, Australian male life expectancy was just under 68 years; for boys born here today that expectation has grown to more than 80. The story of increasing life expectancy is even better for women.

The World Health Organisation says women outlive men “all around the world” with the gap currently sitting at just over four years. Global life expectancy has increased by more than five years in the past decade, the fastest rise since the 1960s.

Life expectancy (both sexes) in Australia now is 82 years and six months. In Sweden the expectation is about a month lower; is it that one month that so upsets Thunberg?

Around the world, for every person who falls into poverty today, there are three who escape it. The Brookings Institution reports that last year the world moved beyond a crucial and positive tipping point: for the first time more than half the world’s population was middle class or rich. This means the proportion who are poor or vulnerable has been cut to a minority for the first time in human history; and remember this is happening while the world population continues to grow rapidly.

The Sustainable Development Goals data tracker tells us that as recently as 1940 people who could read and write were in the global minority. By 1950 the literate made up 56 per cent of the world population, and now (again despite huge population increases) the global literacy rate is more than 86 per cent.

Even the quality of our air has improved dramatically. Typically measured as sulphur dioxide emissions , global air pollution reached more than 150 million tonnes in the 80s and since then has been reduced by more than a third, with the reductions coming from the wealthy nations of Europe and North America.

— the worldwide number of children dying from measles has fallen from 600,000 to 100,000 and diar-  rhoea deaths have been cut from 1.6 million to a third of that. Maternal deaths in childbirth have been reduced to a fraction of previous rates.

In short, even though there are more of us, we are healthier, more prosperous, better educated and longer-lived than ever before. The air we breathe is cleaner. The richer we get, the more we spend on preserving our environments and we slow our rates of population growth. Along the way we improve technologies that boost health, increase enjoyment, conserve energy , reduce pollution and recycle products. You don’t have to be Pollyanna to see the clear trajectory of human development.

Global warming might present a challenge. But the answer lies in science and technology, in debate and policy, in carefully considering theories against recorded facts, and in assessing costs and benefits, not in putting on the most overwrought displays or creating the greatest apprehension.

Some simple observations expose the cant. How can the doomsday scenarios of the climate activists be taken seriously when they reject the emissions-free energy option of nuclear power?

Why is there such fear generated over rising sea levels when falling sea levels have left historic ports stranded kilometres inland? Were coastlines ideal then or now, and who decides?

Shouldn’t we be glad the climate refuses to warm in line with the modelling and that natural disasters are not discernibly worse or more frequent?

If the Earth warms another degree will the reduced deaths from cold in the northern hemisphere grossly outweigh any increased heat stress deaths elsewhere? Will more land be productive or less? And why can’t these questions be discussed sensibly?

NASA has reported how up to half the planet’s vegetated land has shown significant greening during the past four decades, mainly because of increased carbon dioxide in the atmosphere. This has also been a factor in upward trends for agricultural crop yields. It is astonishing that we don’t hear more discussion about these benefits and how they can be harnessed further. After all, for all our focus on technology , we all know the greatest “carbon pollution” reduction machine has already been created — the tree.

None other than the chief of the UN’s World Meteorological Organisation, Petteri Taalas, has warned the “extremists” and “doomsters” are the biggest threat in the climate debate.

“It is not going to be the end of the world,” Taalas says. “The world is just becoming more challenging.”

In my view, Thunberg is as much a victim of hyperbole as an agent of it. It should be impossible for adults to be as angry at her as she is at them; but some rise to the bait with ugly abuse.

The over-reaction can be blamed partly on the nonsensical deification that comes from green-left activists and media. The ABC’s Newcastle station this week invited audiences to compare Thunberg’s speech with those of Winston Churchill, Martin Luther King Jr and John F. Kennedy.

She has more in common with Walter Mitty or Ferris Bueller . Ask not what Greta has done for the climate, ask what you can do for the climate debate.

This article is from the September 28 issue of The Australian Digital Edition. To subscribe, visit http://www.theaustralian.com.au/.