Written by Contributed by Albert Parker

Protesters against big govt and wealthy man narratives arrested in Melbourne … To be saved by the nasty flu everybody must stay home … Anyone understanding the corruption and hidden agenda behind this scam?

It is not that often that we at PSI quote the Main Stream Media, but thank you to The Age for publishing this article.

Ten people were arrested in dramatic scenes outside Parliament House on Sunday, as more than 100 protesters opposed coronavirus lockdown measures, despite warnings from Victorian police earlier this week to stay home.

Australia’s Chief Medical Officer, Professor Brendan Murphy, has called for the protesters to be held to account, dismissing claims from some at the rally that 5G mobile phone technology was related to the pandemic as “nonsense”.

The Age witnessed one violent encounter in which a police officer was knocked to the ground while arresting a male protester during the two-hour rally. One officer was taken to hospital for what is believed to be a rib injury, a Victoria Police spokeswoman said.

One of the key speakers at the gathering had blood on his forehead as he was arrested and led away from the crowd.

The police spokeswoman said most arrests were for failing to comply with the Chief Health Officer’s coronavirus lockdown directions.

“Three of the offenders will also be charged with assaulting a police officer, and another offender will be charged with discharging a missile after allegedly throwing a bottle at police,” she said.

All offenders were released pending summons, and other individuals may be issued with fines once they are identified during ongoing investigations, the spokeswoman said.

Various Facebook groups had been promoting the rally to protest against “self-isolating, social distancing, tracking apps [and] 5G being installed”.

As well as railing against Australia’s stay-at-home directions, organisers also spoke about their scepticism of climate change, chem-trails and concerns about anti-globalism.

Melbourne man Matt Lawson, 42, an administrator of an anti-5G Facebook group, said the number of different issues spoken about at the rally pointed to an overall distrust of government and frustration over the interruption of lives during the pandemic.

“People are talking about lockdowns, mandatory vaccines, which I think is concerning a lot of people and they also go into things like microchipping, which maybe isn’t as mainstream,” he said.

“People have been locked down for over a month and people want to be heard, that was the big thing today.”

Another woman, who identified herself as Theresa and introduced herself to the crowd as a Victorian teacher, claimed her research proved the coronavirus pandemic was orchestrated in part by Microsoft founder Bill Gates.

A number of protesters were live-streaming to their own Facebook pages and groups. Many directed their anger at both Labor Victorian Premier Daniel Andrews and Liberal Prime Minister Scott Morrison.

Protester Walter, who did not want to use his last name, was the first to be arrested, given a $1652 fine and told to move on.

The Orbost man said the fine was “no big deal” as he had achieved what he came to Melbourne to do today – to “spread the message”.

“The police just want to intimidate you and scare you,” he said. “We have a right to visit our mothers, a right to protest.” 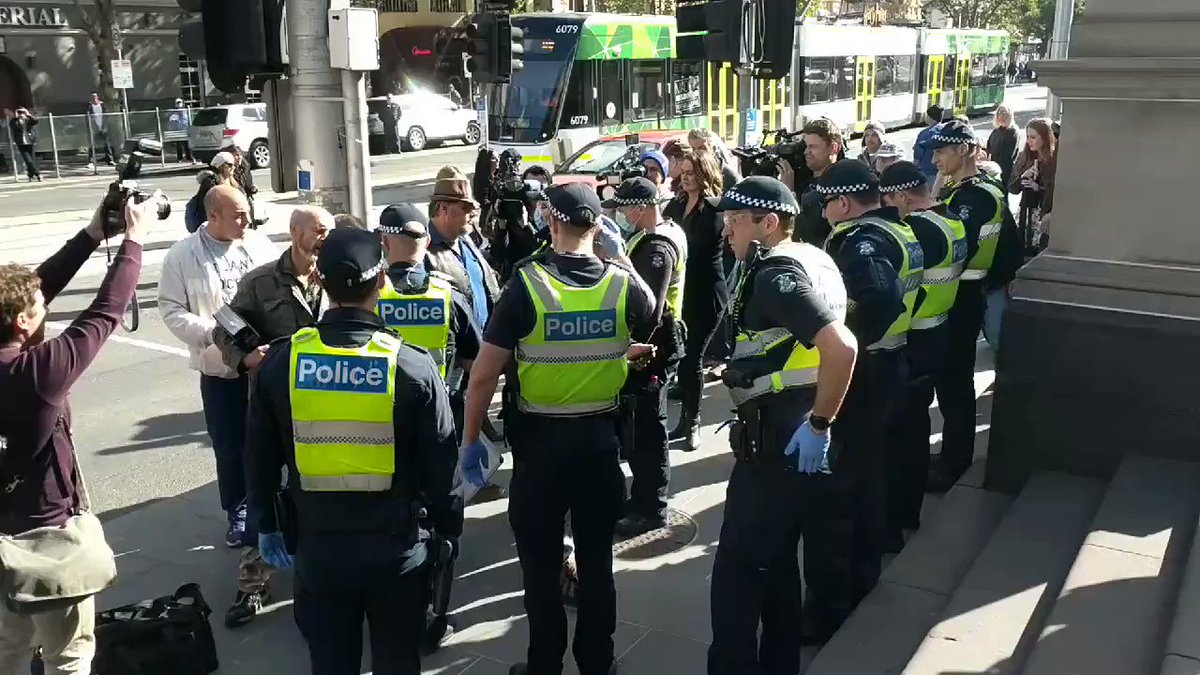 Some protesters were young families with children, including babies.

Jo, a 42-year-old mother of two who did not want to give her surname, went to the protest with her infant daughter.

She said she had no safety concerns about bringing her baby to the protest and said she felt compelled to come as government lockdown measures had undermined freedom.

“People feel like their freedoms are being taken away,” she said. “We haven’t had a choice in any of this.”

She said she did not want to be labelled as anti-science for her scepticism of a coronavirus vaccine, 5G towers and the deadliness of COVID-19.

Another arrest, this time of a man of who was with his female partner and infant child. The pram was pulled away from the fray as officers moved in to apprehend the man on the ground. @theage As of 2pm most protestors have left the scene. 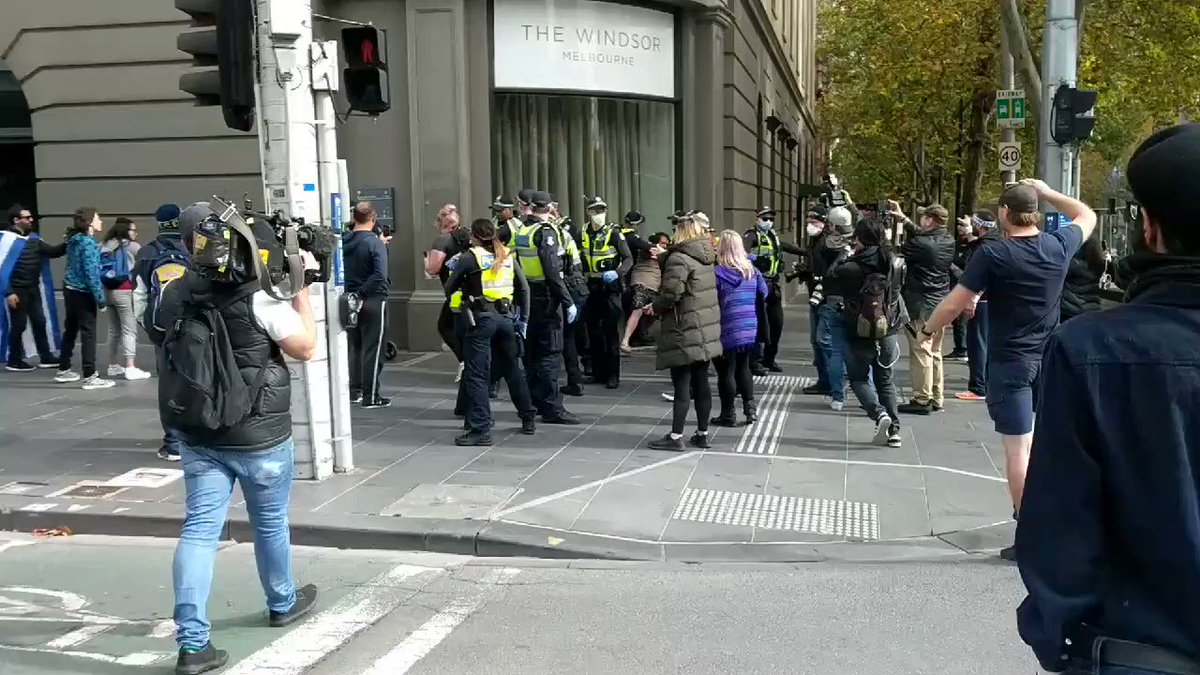 “We are anti-fake science,” she said.”You have the right to have choice over your own body.”

Victorian Health Minister Jenny Mikakos on Sunday said the protesters were in breach of the stay-at-home directive and could be fined.

“It’s incredibly disappointing that people would be protesting or seeking to suggest we don’t have a pandemic,” she said. She said the protesters only needed to turn on the news to see what was happening in the United States, Britain and many parts of Europe.”Those people know that this pandemic is not fake news. We’ve had 18 Victorians lose their lives as a result of COVID-19. I know that there are many people who are feeling very sad today because they don’t have their mothers or their grandmothers with them whose lives were lost as a result of this virus,” Ms Mikakos said.

“That’s incredibly disappointing that some individuals do not understand that these restrictions have been put in place to keep them safe, to keep their families safe and the whole of Victoria safe.”

Asked about Sunday’s protest, Professor Murphy said he had been targeted by conspiracy theorists who believed 5G mobile phone technology was related to the pandemic.

“There is unfortunately a lot of very silly misinformation out there,” Professor Murphy said.

“There is absolutely no evidence about 5G doing anything in the coronavirus space. I have unfortunately received a lot of communication from these conspiracy theorists myself.

“It is complete nonsense. 5G has got nothing at all to do with coronavirus. I understand people have the right to protest, but they should not be breaching those social distancing rules and if they are, they should be held to account.”

The breaches included five people from different addresses travelling in a vehicle together to get food, eight people drinking alcohol in a private residence, and multiple people committing criminal offences including theft, drug-related offending and graffiti.